In 1967 they wrote the anthem of an era. Now they are aiming to prove they are no one-hit wonder, writes Leila Farrah 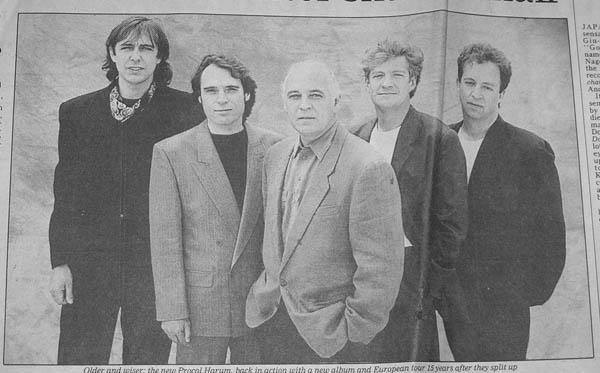 "The Hippies are Coming!" trumpeted Newsweek in 1967. Suddenly, love beads, beatific grins and mind-expanding music were everywhere. On both sides of the Atlantic, parents locked their daughters up to protect them from the Summer of Love, that infamous feast of bodily excess and psychedelia.

From parents to acid-heads, everyone remembers the summer's theme song, A Whiter Shade of Pale – an odd confection of cathedral organ (inspired by Bach's Air on a G String), gothic ramblings about vestal virgins and light fandangos, and that even odder title. It put the "progressive" band Procol Harum at Number One for six weeks in Britain, becoming an anthem for the era, finally selling more than six million copies worldwide.

A mere three months earlier, vocalist/pianist Gary Brooker and lyricist Keith Reid had been reduced to placing an ad in Melody Maker for musicians to join them and form a band. Naming themselves after a friend's tabby [sic] cat, Procol Harum first performed their hit at the Speakeasy club just off Carnaby Street in 1967.

A decade later that song was still winning popularity awards (Best British Pop Single 1952–1977), condemning itself to a lifetime of musical wallpaper for radio shows and paint adverts. It was the theme for Nick Nolte's tormented artist character in Martin Scorsese's section of New York Stories, and it [sic] inspired Douglas Adams to write The Restaurant at the End of the Universe.

By 1977, the album/tour/album treadmill and nine line-up changes had taken its toll, and the group was in no shape to compete with the arrival of punk. Procol Harum folded after a farewell tour. 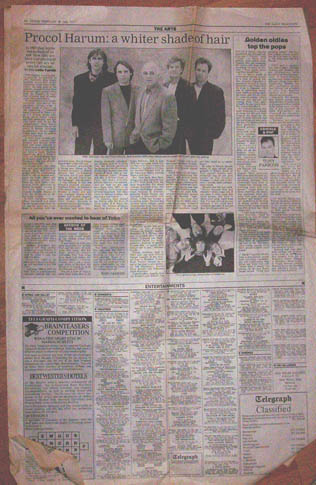 Now, however, armed with a strong new album – The Prodigal Stranger – Procol Harum are re-forming "because we've got something to say, not just to pay the mortgage", says Brooker.

I was talking to him and Procol's original organist, Matthew Fisher at Brooker's 16th-century Surrey home. Brooker is chatty and amicable, a quieter version of his Sixties' self in judo slippers and exuberant floral shirt. Fisher, dressed in denims and trainers, butts in occasionally.

Brooker still feels that, despite musically adventurous albums such as A Salty Dog, the British perceived the group as a one-hit wonder, picturesque session men who ripped off Bach, only to vanish without trace: "People still like A Whiter Shade of Pale, but don't actually believe that we ever existed. And yet what we are, and have been since 1967, is an incredibly well-respected international band. Not video stars, or fashion leaders, but musicians and writers."

In America, they shared top billing with the likes of Janis Joplin, BB King, the Band, the Allman Brothers and Jimi Hendrix at all the major festivals. And, in July 1972 the curiously titled Procol Harum in Concert with the Edmonton Symphony Orchestra reached Number Five in the American charts, earning them a gold disc.

But what have they been doing since that farewell tour in 1977? Well, Keith Reid, the man responsible for those strange lyrics, has set up a publishing/management company in America; guitarist Robin Trower has pursued a successful solo career; Fisher has bought a recording studio. Brooker has written three albums with contributions from Eric Clapton (who taught Brooker to fish [sic]), George Harrison and Phil Collins. He has also written a full orchestral score for a contemporary Dutch ballet that mixes classical technique with modern kaleidoscopic formations.

Brooker wrote the new songs on The Prodigal Stranger for Procol's original drummer, BJ Wilson, who was in a coma after a long illness. "I played him drum machine tapes on headphones, hoping it might incense him so much he'd bounce out of bed," Brooker recalls.

Wilson, however, died in 1990 and the new Procol Harum consists of the original four – Brooker, Fisher, Reid, Trower (though he is not on the tour) - plus guitarist Jeff Whytehorn [sic], bassist Dave Bronze and drummer Mark Brzezicki.

Unbelievably, despite Procol Harum's past history, The Prodigal Stranger had to do the demo tape rounds to interested record companies before Zoo Records signed them.

Fresh from a 25-city European tour publicising the album, with British dates planned for Easter, Procol Harum are again relishing life on the road, chuffed that their hard core of ageing fans had brought their children along.

"There's a bit more fondness for established groups now," says Brooker, "especially when you hear that New Kids on the Block don't even sing on stage." Fisher is more realistic: "No one, even the younger members, would see this band as a career move."

So what do Procol Harum expect to gain second time around? A Whiter Shade of Pale again? Surely not, although one of the new tracks on The Prodigal Stranger – Man With a Mission – has the same [sic] unforgettable sound.

Brooker has the last word: "We've learned that you shouldn't churn songs out. If you want to write songs that move people, you have to throw a few away. Apart from that, I'm sure we'd all be very pleased if we could have whatever amounts of success they're willing to give us."

Thanks, Mike, for the typing