In rock music circles there are few bands which, once their musical quality deteriorates can stage a successful comeback without drastic change. Most often the band will split, sometimes giving birth to quite good offspring outfits up, or simply fade away. 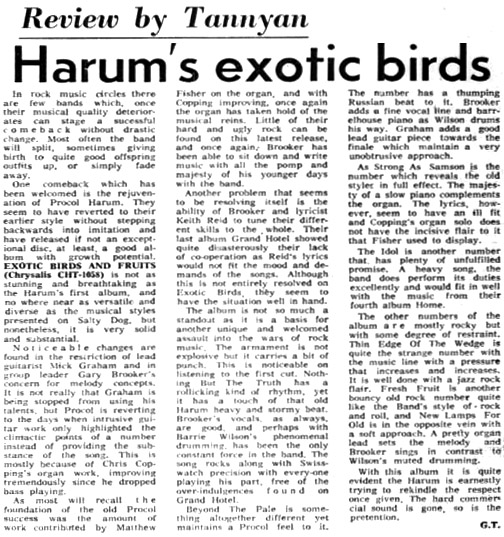 One comeback which has been welcomed is the rejuvenation of Procol Harum. They seem to have reverted to their earlier style without stepping backwards into imitation and have released if not an exceptional disc, at least a good album with growth potential. Exotic Birds and Fruits [sic](Chrysalis CHT-1058) is not as stunning and breathtaking as the Harum’s first album, and nowhere near as versatile and diverse as the musical styles presented on Salty Dog, but nonetheless, it is very solid and substantial.

Noticeable changes are found in the restriction of lead guitarist Mick Graham [sic] and in group leader Gary Brooker’s concern for melody concepts. It is not really that Graham [sic] is being stopped from using his talents, but Procol is reverting to the days when intrusive guitar work only highlighted the climactic points of a number instead of providing the substance of the song. This is mostly because of Chris Copping’s organ work, improving tremendously since he dropped bass playing.

As most will recall the foundation of the old Procol success was the amount of work contributed by Matthew Fisher on the organ, and with Copping improving, once again the organ has taken hold of the musical reins. Little of their hard and ugly rock can be found on this latest release, and once again, Brooker has been able to sit down and write music with all the pomp and majesty of his younger days with the band.

Another problem that seems to be resolving itself is the ability of Brooker and lyricist Keith Reid to tune their different skills to the whole. Their last album Grand Hotel showed quite disastrously their lack of co-operation as Reid’s lyrics would not fit the mood and demands of the songs. Although this is not entirely resolved on Exotic Birds, they seem to have the situation well in hand.

The album is not so much a standout as it is a basis for another unique and welcomed assault into the wars of rock music. The armament is not explosive but it carries a bit of punch. This is noticeable on listening to the first cut. Nothing But the Truth has a rollicking kind of rhythm, yet it has a touch of that old Harum heavy and stormy beat. Brooker’s vocals, as always, are good, and perhaps with Barrie Wilson’s phenomenal drumming, has been the only constant force in the band. The song rocks along with Swiss-watch precision with everyone playing his part, free of the over-indulgences found on Grand Hotel.

Beyond the Pale is something altogether different yet maintains a Procol feel to it. The number has a thumping Russian beat to it. Brooker adds a fine vocal line and barrelhouse piano as Wilson drums his way. Graham [sic] adds a good lead guitar piece towards the finale which maintains a very unobtrusive approach.

As Strong as Samson is the number which reveals the old styles in full effect. The majesty of a slow piano complements the organ. The lyrics, however, seem to have an ill fit and Copping’s organ solo does not have the incisive flair to it that Fisher used to display.

The Idol is another number that has plenty of unfulfilled promise. A heavy song, the band does perform its duties excellently and would fit in well with the music from their fourth album Home.

The other numbers of the album are mostly rocky but with some degree of restraint. Thin Edge of the Wedge is quite the strange number with the music line with a pressure that increases and increases. It is well done with a jazz rock flair. Fresh Fruit is another bouncy old rock number quite like the Band’s style of rock and roll, and New Lamps for Old is in the opposite vein with a soft approach. A pretty organ lead sets the melody and Brooker sings in contrast to Wilson’s muted drumming.

With this album it is quite evident the Harum is earnestly trying to rekindle the respect once given. The hard commercial sound is gone, so is the pretention.