Up for sale: five forgotten heroes of the British pop scene

Up for sale: five forgotten heroes of the British pop scene. 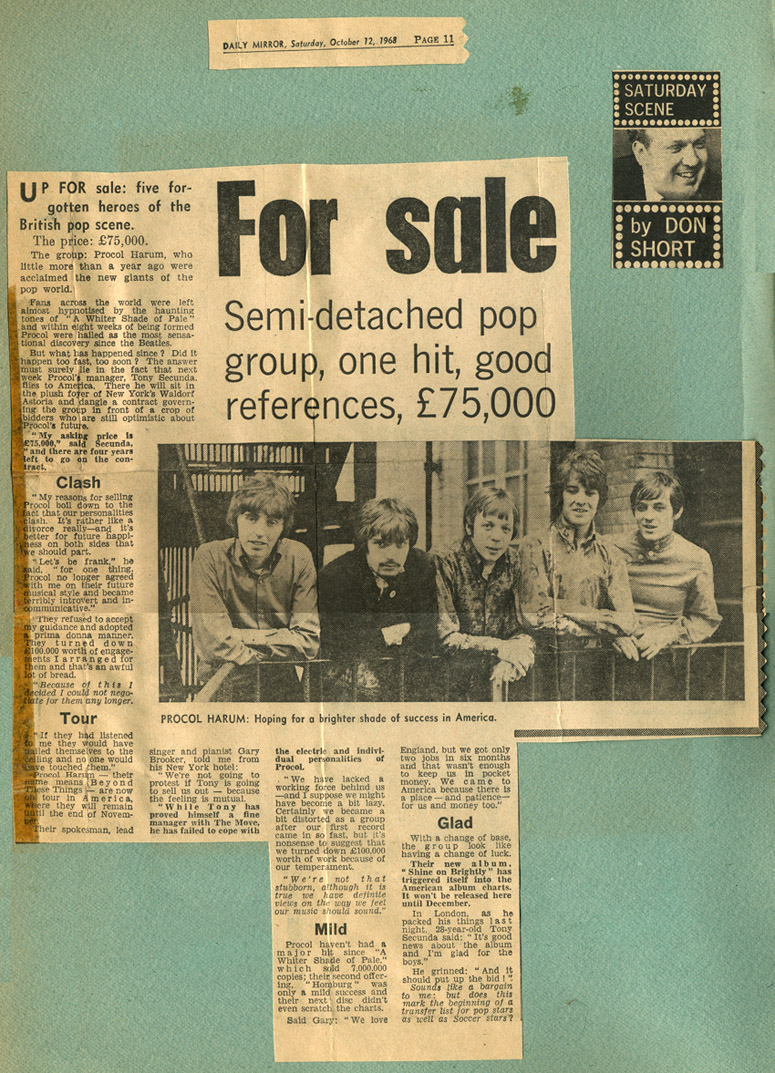 The group: Procol Harum, who little more than a year ago were acclaimed the new giants of the pop world.

Fans across the world were left almost hypnotised by the haunting tones of A Whiter Shade of Pale and within eight weeks of being formed Procol were hailed as the most sensational discovery since the Beatles.

But what has happened since? Did it happen too fast, too soon? The answer must surely lie in the fact that next week Procol’s manager, Tony Secunda, flies to America. There he will sit in the plush foyer of New York’s Waldorf Astoria and dangle a contract governing the group in front of a crop of bidders who are still optimistic about Procol’s future.

‘My reasons for selling Procol boil down to the fact that our personalities clash. It’s rather like a divorce, really – and it’s better for future happiness on both sides that we should part.

‘Let’s be frank,’ he said, ‘for one thing, Procol no longer agreed with me on their future musical style and became terribly introvert and incommunicative [sic].’

‘They refused to accept my guidance and adopted a prima donna manner. They turned down £100,000 worth of engagements I arranged for them and that’s an awful lot of bread.

‘Because of this I decided I could not negotiate for them any longer.

‘If they had listened to me they would have nailed themselves to the ceiling and no one would have touched them.’

Procol Harum – their name means Beyond these Things – are now on tour in America, where they will remain until the end of November.

Their spokesman, lead singer and pianist Gary Brooker, told me from his New York hotel:

‘We’re not going to protest if Tony is going to sell us out – because the feeling is mutual.

‘While Tony has proved himself a fine manager with The Move, he has failed to cope with the electric and individual personalities of Procol.

‘We have lacked a working force behind us – and I suppose we might have become a bit lazy. Certainly we became a bit distorted as a group after our first record came in so fast, but it’s nonsense to suggest that we turned down £100,000 worth of work because of our temperament.

‘We’re not that stubborn, although it is true we have definite views on the way we feel our music should sound.’

Procol haven’t had a major hit since A Whiter Shade of Pale, which sold 7,000,000 copies; their second offering, Homburg, was only a mild success and their next disc didn’t even scratch the charts.

Said Gary, ‘We love England, but we got only two jobs in six months and that wasn’t enough to keep us in pocket money. We came to America because there is a place – and patience – for us and money too.’

Their new album, Shine on Brightly has triggered itself into the American album charts. It won’t be released here until December.

In London, as he packed his things last night, 28-year-old Tony Secunda said: ‘It’s good news about the album and I’m glad for the boys.’

He grinned: ‘And it should put up the bid!’

Sounds like a bargain to me: but does this mark the beginning of a transfer list for pop stars as well as Soccer stars?

Photo caption: PROCOL HARUM: Hoping for a brighter shade of success in America.