Sound of Harum is Sophisticated

Probably the most sophisticated sound coming out of popdom today is the strangely haunting, addicting music of a crew called Procol Harum.

Their name derived from a Latin phrase meaning "beyond these things," Procol Harum certainly does go beyond anything yet to be heard in the world of commercial rock radio. 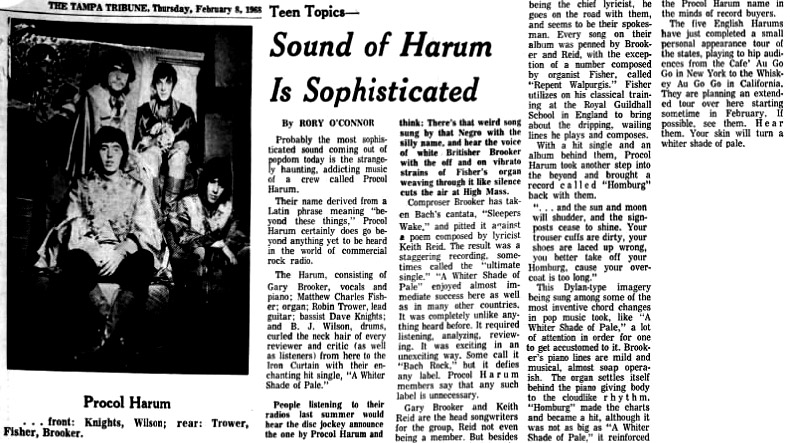 The Harum, consisting of Gary Brooker, vocals and piano; Matthew Charles Fisher, organ; Robin Trower, lead guitar; bassist Dave Knights; and BJ Wilson, drums, curled the neck hair of every reviewer and critic (as well as listeners) from here to the Iron Curtain with their enchanting hit single, A Whiter Shade of Pale.

People listening to their radios last summer would hear the disc jockey announce the one by Procol Harum and think: There’s that weird song sung by that Negro with the silly name, and hear the voice of white Britisher Brooker with the off and on vibrato strains of Fisher’s organ weaving through it like silence cuts the air at High Mass.

Composer Brooker has taken Bach’s cantata, Sleepers Wake, and pitted it against a poem composed by lyricist Keith Reid. The result was a staggering recording, sometimes called the ‘ultimate single’. A Whiter Shade of Pale enjoyed almost immediate success here as well as in many other countries. It was completely unlike anything heard before. It required listening, analysing, reviewing. It was exciting in an unexciting way. Some call it ‘Bach Rock’, but it defies any label. Procol Harum members say that any such label is unnecessary.

Gary Brooker and Keith Reid are the head songwriters for the group, Reid not even being a member. But besides being the chief lyricist, he goes on the road with them, and seems to be their spokesman. Every song on their album was penned by Brooker and Reid, with the exception of a number composed by organist Fisher, called Repent Walpurgis. Fisher utilizes on [sic] his classical training at the Royal Guildhall School in England to bring about the dripping, wailing lines he plays and composes.

With a hit single and an album behind them, Procol Harum took another step into the beyond and brought a record called Homburg back with them.

“… and the sun and moon will shudder, and the signposts cease to shine. Your trouser cuffs are dirty, your shoes are laced up wrong, you better take off your Homburg, cause your overcoat is too long."

This Dylan-type imagery being sung among some of the most inventive chord changes in pop music took, like A Whiter Shade of Pale, a lot of attention in order for one to get accustomed to it. Brooker’s piano lines are mild and musical, almost soap opera-ish. The organ settles itself behind the piano giving body to the cloudlike rhythm. Homburg made the charts and became a hit, although it was not as big as A Whiter Shade of Pale, it reinforced the Procol Harum name in the minds of record buyers.

The five English Harums have just completed a small personal appearance tour of the States, playing to hip audiences from the Café Au Go Go in New York to the Whiskey Au Go Go in California. They are planning an extended tour over here starting sometime in February. If possible, see them. Hear them. Your skin will turn a whiter shade of pale.