Since A Whiter Shade of Pale shot the Procol Harum from anonymity to stardom a lot has happened to them. They have fallen apart with exhaustion and disagreement, reshuffled their line-up, and come up with their fantastic follow-up record, Homburg.  An amazing success story. How did they do it? RAVE’s Jeremy Pascall talks to the new, reshuffled Procol Harum and finds out!

The Procol Harum have never been easy to talk to. Gary Brooker’s answers are short, succinct. Keith Reid talks with an intellectual arrogance that is totally uncompromising, often difficult to grasp. Dave Knights is a quiet, unassuming character. Matthew Fisher admits he’s very self-conscious. The two newest members, Barry Wilson and Robin Trower, are still finding their feet and therefore their tongues.

Although A Whiter Shade of Pale seems to have been with us as long as It’s a Long Way to Tipperary, it is sobering to realise that the Procol Harum are the success story of ’67. Conceived, created, crowned, cracked, and continuing, all within the space of a few months. The group have battled through a turmoil of pop ballyhoo, outrageous over-praise, the inevitable ‘told you so’ when members left, sneering doubts of their ability to follow-up. How has it all affected their characters? Who are the Procol Harum since the shuffle? 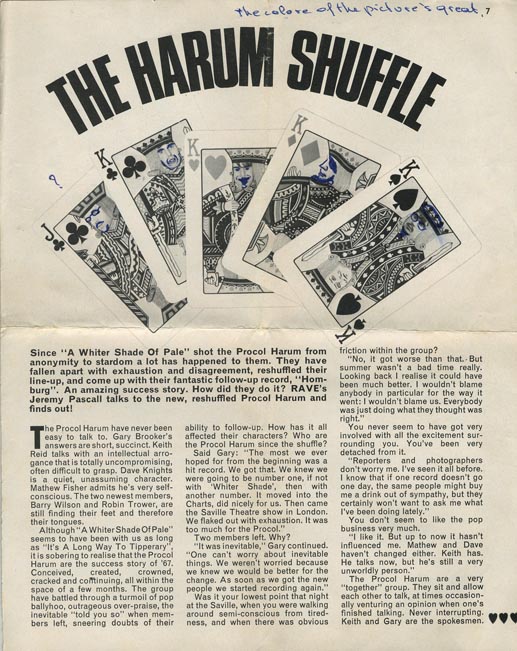 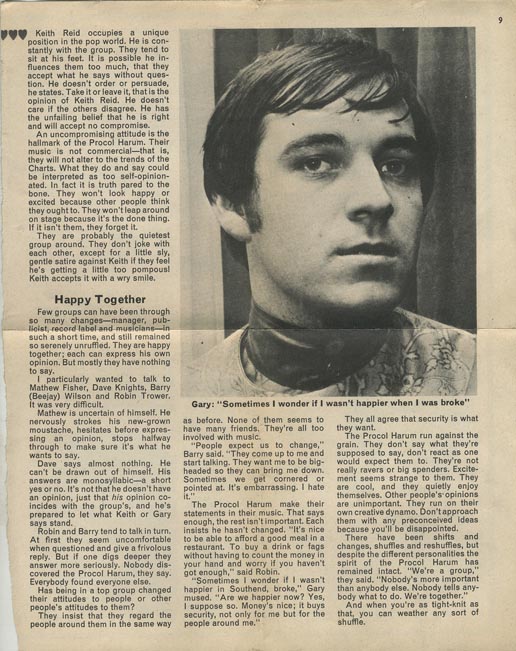 photo caption: Gary: ‘Sometimes I wonder if I wasn’t happier when I was broke’ [Click to enlarge the scans]

Said Gary: ‘The most we ever hoped for from the beginning was a hit record. We got that. We knew we were going to be number one, if not with Whiter Shade  then with another number. It moved into the charts, did nicely for us. Then came the Saville Theatre show in London. We flaked out with exhaustion. It was too much for the Procol.’

‘It was inevitable,’ Gary continued. ‘One can’t worry about inevitable things. We weren’t worried because we knew we would be better for the change. As soon as we got the new people we started recording again.’

Was it your lowest point that night at the Saville, when you were walking around semi-conscious from tiredness, and when there was obvious friction within the group?

‘No, it got worse than that. But summer wasn’t a bad time really. Looking back I realise it could have been much better. I wouldn’t blame anybody in particular for the way it went: I wouldn’t blame us. Everybody was just doing what they thought was right.’

You never seem to have got very involved with all the excitement surrounding you. You’ve been very detached from it.

‘Reporters and photographers don’t worry me. I’ve seen it all before. I know that if one record doesn’t go one day, the same people might buy me a drink out of sympathy, but they certainly won’t want to ask me what I’ve been doing lately. ‘

You don’t seem to like the pop business very much.

‘I like it. But up to now it hasn’t influenced me. Mathew [sic] and Dave haven’t changed either. Keith has. He talks now, but he’s still a very unworldly person.’

The Procol Harum are a very ‘together’ group. The sit and allow each other to talk, at times occasionally venturing an opinion when one’s finished talking. Never interrupting. Keith and Gary are the spokesmen.

Keith Reid occupies a unique position in the pop world. He is constantly with the group. They tend to sit at his feet. It is possible he influences them too much, that they accept what he says without question. He doesn’t order or persuade, he states. Take it or leave it, that is the opinion of Keith Reid. He doesn’t care if the others disagree. He has the unfailing belief that he is right and will accept no compromise.

An uncompromising attitude is the hallmark of the Procol Harum. Their music is not commercial – that is, they will not alter to the trends of the Charts, What they do and say could be interpreted as too self-opinionated. In fact it is truth pared to the bone. They won’t look happy or excited because other people think they ought to. They won’t leap around on stage because it’s the done thing. If it isn’t them, they forget it.

They are probably the quietest group around. They don’t joke with each other, except for a little sly, gentle satire against Keith if they feel he’s getting a little too pompous! Keith accepts it with a wry smile.

Few groups can have been through so many changes – manager, publicist, record label and musicians – in such a short time, and still remained so serenely unruffled. They are happy together; each can express his own opinion. But mostly they have nothing to say. 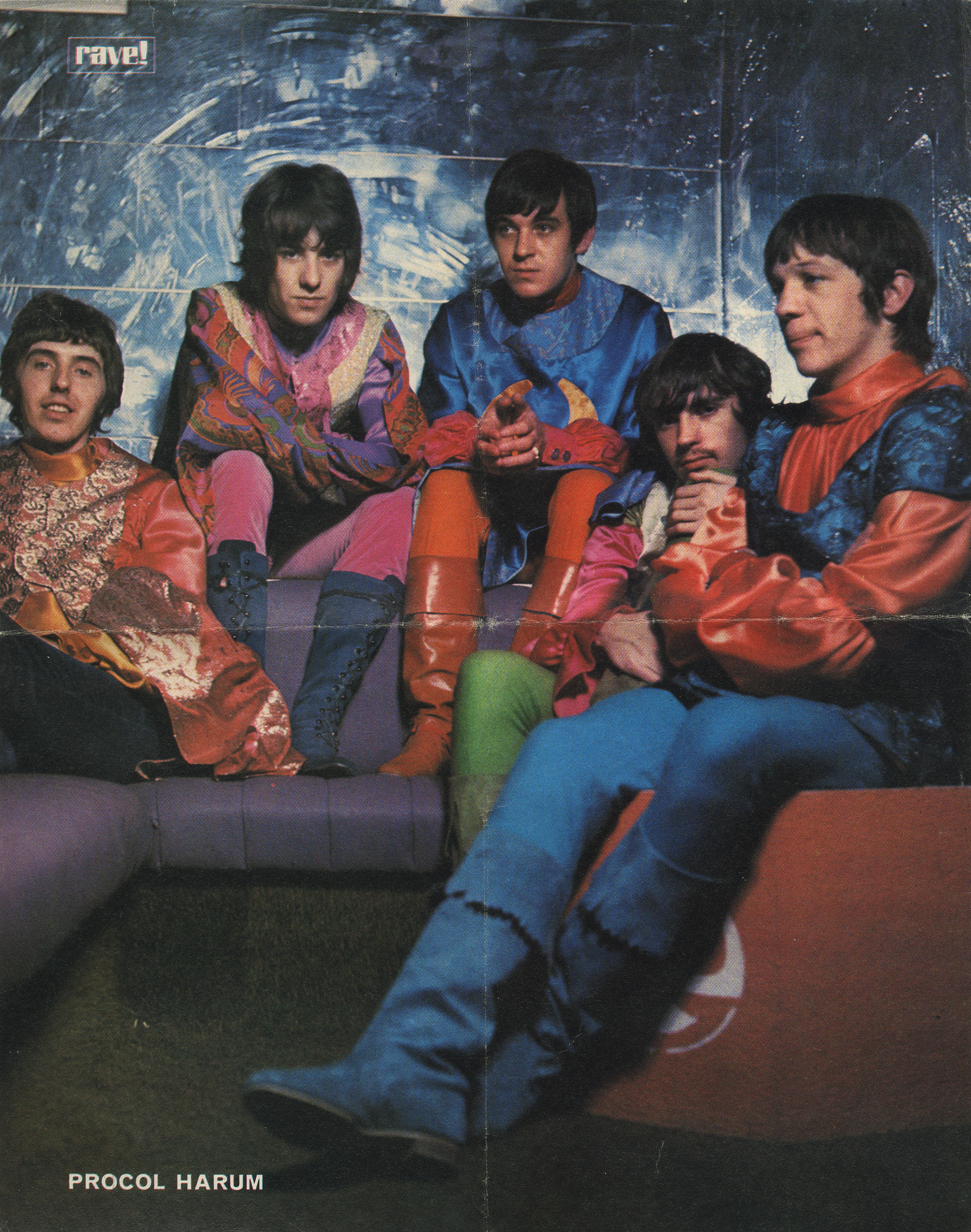 Mathew [sic] is very uncertain of himself. He nervously strokes his new-grown moustache, hesitates before expressing an opinion, stops halfway through to make sure it’s what he wants to say.

Dave says almost nothing. He can’t be drawn out of himself. His answers are monosyllabic – a short yes or no. It’s not that he doesn’t have an opinion, just that his opinion coincides with the group’s, and he’s prepared to let what Keith or Gary says stand.

Robin and Barry tend to talk in turn. At first they seem uncomfortable when questioned and give a frivolous reply. But if one digs deeper they answer more seriously. Nobody discovered the Procol Harum, they say. Everybody found everyone else.

They insist that they regard the people around them in the same way as before. None of them seems to have many friends. They’re all too involved with music.

‘People expect us to change,’ Barry said. ‘They come up to me and start talking. They want me to be big-headed so they can bring me down. Sometimes we get cornered or pointed at. It’s embarrassing. I hate it.’

The Procol Harum make their statements in their music. That says enough, the rest isn’t important. Each insists he hasn’t changed. ‘It’s nice to be able to afford a good meal in a restaurant. To buy a drink or fags without having to count the money in your hand and worry if you haven’t got enough,’ said Robin.

‘Sometimes I wonder if I wasn’t happier in Southend, broke,’ Gary mused. ‘Are we happier now? Yes, I suppose so. Money’s nice; it buys security, not only for me but for the people around me.’

They all agree that security is what they want.

The Procol Harum run against the grain. They don’t say what they’re supposed to say, don’t react as one would expect them to. They’re not really ravers or big spenders. Excitement seems strange to them. They are cool, and they quietly enjoy themselves. Other people’s opinions are unimportant. They run on their own creative dynamo. Don’t approach them with any preconceived ideas because you’ll be disappointed.

There have been shifts and changes, shuffles and reshuffles, but despite the different personalities the spirit of the Procol Harum has remained intact. ‘We’re a group,’ they said. ‘Nobody’s more important than anybody else. Nobody tells anybody what to do. We’re together.’

And when you’re as tight-knit as that, you can weather any sort of shuffle.