Despite the scary front-page headline, Procol did not of course 'split up' at all, as the text below it immediately makes clear. And the 'amicable terms' are somewhat contradicted in what follows as well. Click on the links to read the original scans, or just enjoy the typed-out versions (thanks, Lola) 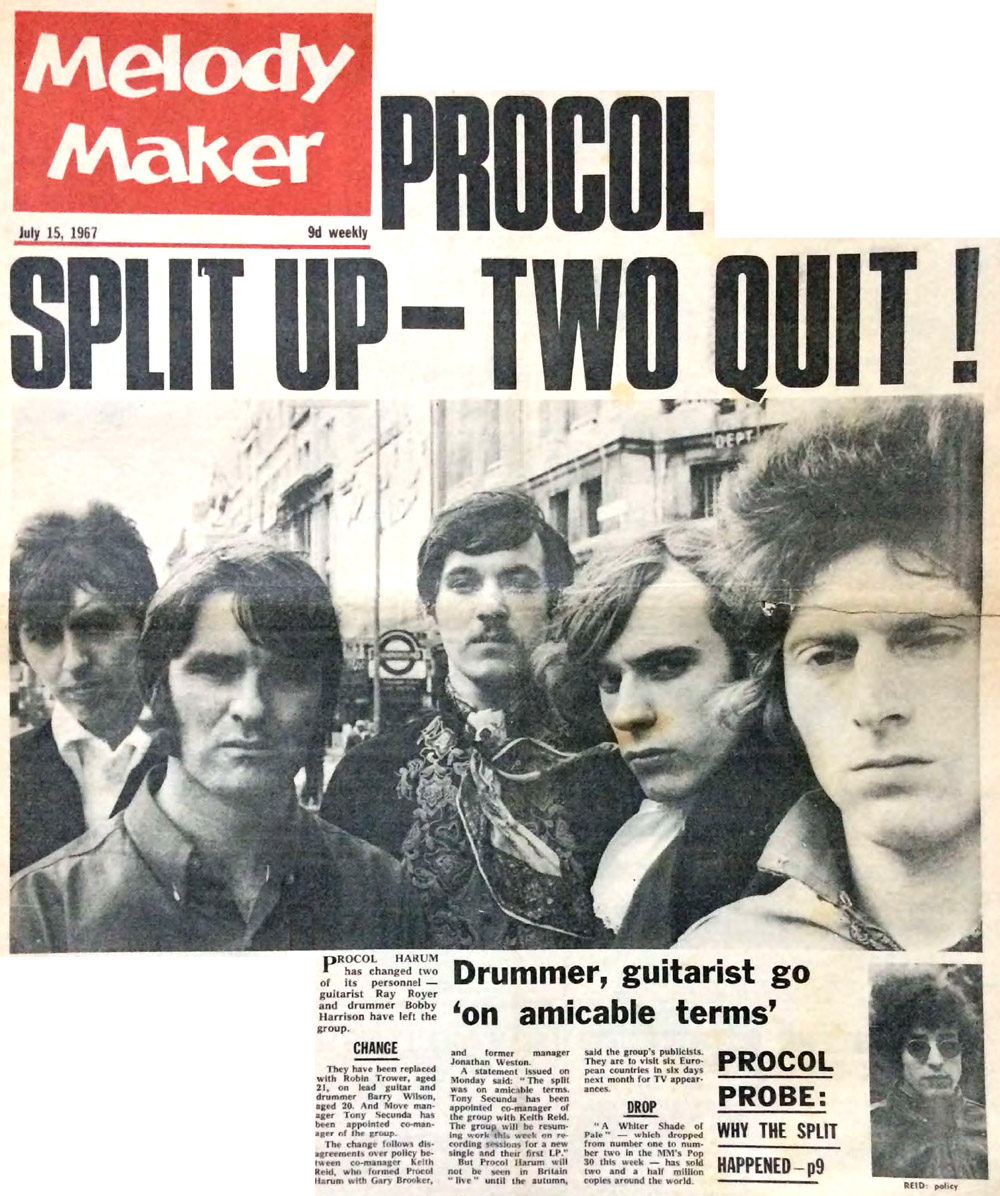 Procol Harum  has changed two of its personnel – guitarist Ray Royer and drummer Bobby Harrison have left the group.

They have been replaced with Robin Trower, aged 21, on lead guitar and drummer Barry Wilson, aged 20. And Move manager Tony Secunda has been appointed co-manager of the group. The change follows disagreements over policy between comanager Keith Reid, who formed Procol Harum with Gary Brooker, and former manager Jonathan Weston. A statement issued on Monday said: ‘The split was on amicable terms. Tony Secunda has been appointed co-manager of the group with Keith Reid. The group will be resuming work this week on recording sessions for a new single and their first LP.’ But Procol Harum will not be seen in Britain ‘live’ until the autumn, said the group's publicists. They are to visit six European countries in six days next month for TV appearances.

A Whiter Shade of Pale – which dropped from number one to number two in the MM’s Pop 30 this week – has sold two and a half million copies around the world.

Procol Probe : how the break-up came to pass

Chris Welch and Nick Jones fill in the split background

An explosive week, filled with mystery and muffled resentment, for Procol Harum, the group that had to follow in the sound wake of a beautiful monster called Whiter Shade of Pale, and seized-up under the pressure.

Freak records have happened before, but none so devastating as the two and a half million seller, five weeks at number one in the MM Pop 30 that captured the imagination of pop fans with its Bach inspired organ chords and modern soul vocal.

Then came the work and a hectic round of TV, club and concert appearances which happened so rapidly the group cried halt and pleaded exhaustion. Management split followed and Keith Reid ended his association with co-manager Jonathon Weston of New Breed Management.

This week it was announced Procols Ray Royer (guitar) and Bobby Harrison (drums) had left and Move manager Tony Secunda had replaced Weston.

The two quitters pin to form a new group to be managed by Weston.

Said Weston on Monday: ‘They are going to do something on their own. They had a difference of opinion with the group. They could not do what they wanted to do and didn’t agree with the methods of the last few weeks. They feel a group has got to progress and that they should all share in discussions.’ 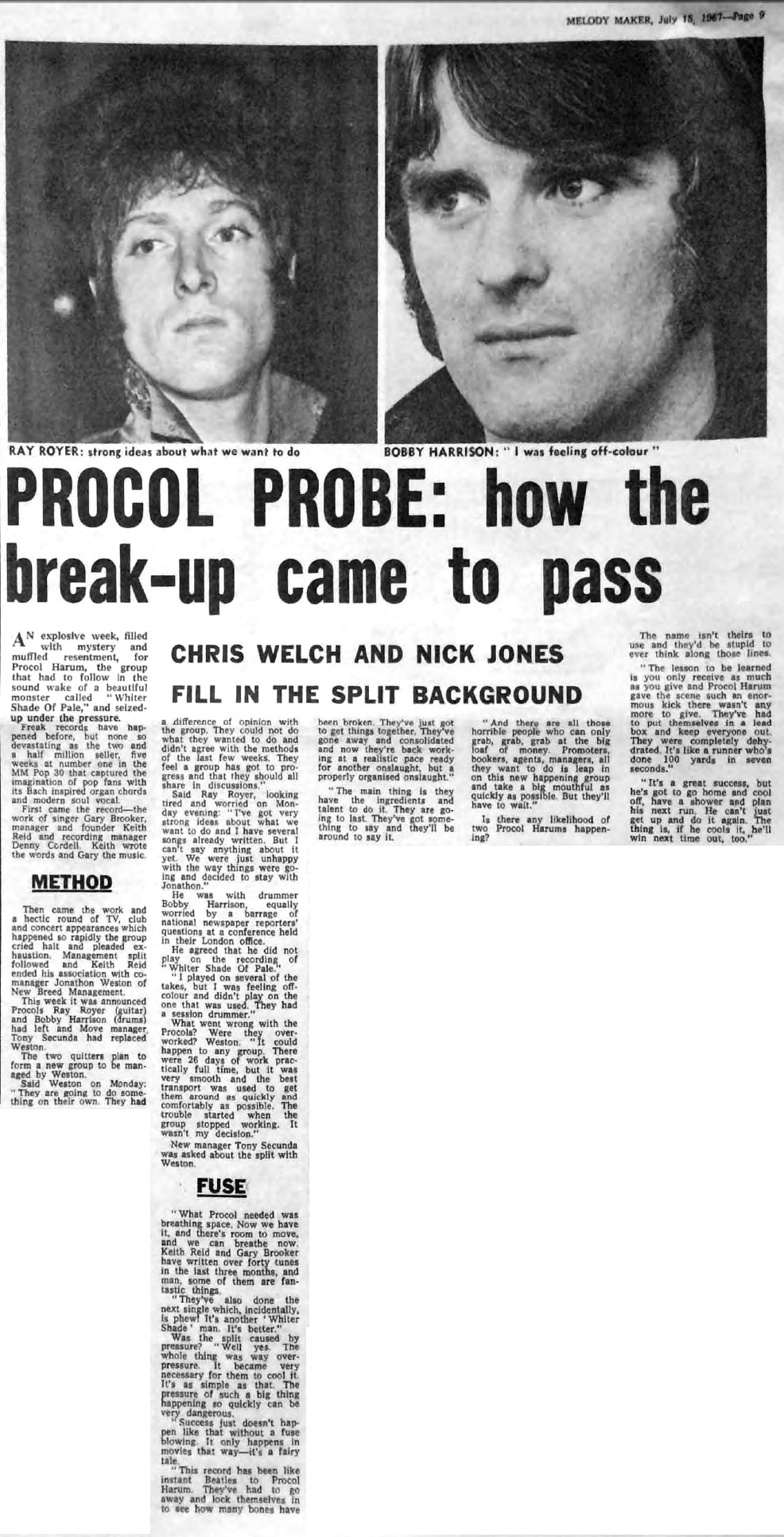 aid Ray Royer, looking tired and worried on Monday evening: ‘I’ve got very strong ideas about what we want to do and I have several songs already written. But I can’t say anything about it yet. We were just unhappy with the way things were going and decided to stay with Jonathon.’

He was with drummer Bobby Harrison, equally worried by a barrage of national newspaper reporters’ questions at a conference held in their London office.

He agreed that he did not play on the recording of Whiter Shade of Pale.

‘I played on several of the takes, but I was feeling off-colour and didn’t play on the one that was used. They had a session drummer.’

What went wrong with the Procols? Were they overworked? Weston. ‘It could happen to any group. There were 26 days of work practically full time, but it was very smooth and the best transport was used to get them around as quickly and comfortably as possible. The trouble started when the group stopped working. It wasn’t my decision.’ New manager Tony Secunda was asked about the split with Weston

‘What Procol needed was breathing space. Now we have it, and there’s room to move, and we can breathe now. Keith Reid and Gary Brooker have written over forty tunes in the last three months, and man, some of them are fantastic things

Was the split caused by pressure? ‘Well yes. The whole thing was way over-pressure. It became very necessary for them to cool it. It’s as simple as that. The pressure of such a big thing happening so quickly can be very dangerous.

‘Success just doesn’t happen like that without a fuse blowing. It only happens in movies that way – it’s a fairy tale.

‘This record has been like instant Beatles to Procol Harum. They’ve had to go away and lock themselves in to see how many bones have been broken.

They’ve just got to get things together. They’ve gone away and consolidated and now they’re back working at a realistic pace ready for another onslaught, but a properly organised onslaught.’

‘The main thing is they have the ingredients and talent to do it. They are going to last. They’ve got some-thing to say and they’ll be around to say it.’

‘And there are all those horrible people who can only grab, grab, grab at the big loaf of money. Promoters, bookers, agents, managers, all they want to do is leap in on this new happening group and take a big mouthful as quickly as possible. But they’ll have to wait.’

Is there any likelihood of two Procol Harums happening?

'The name isn’t theirs to use and they’d be stupid to ever think along those lines.'

‘The lesson to be learned is you only receive as much as you give and Procol Harum gave the scene such an enormous kick there wasn’t any more to give. They’ve had to put themselves in a lead box and keep everyone out. They were completely dehydrated. It’s like a runner who’s done 100 yards in seven seconds.’

‘It’s a great success, but he’s got to go home and cool off, have a shower and plan his next run. He can’t just get up and do it again. The thing is, if he cools it, he’ll win next time out, too.’