Paul Köhrer to the rescue

BtP readers will remember how the call went out (1 April 2015) for assistance with making a shade for
Gary Brooker's lamp project, based on the fine champagne bottle he received during our party on his 69th birthday. 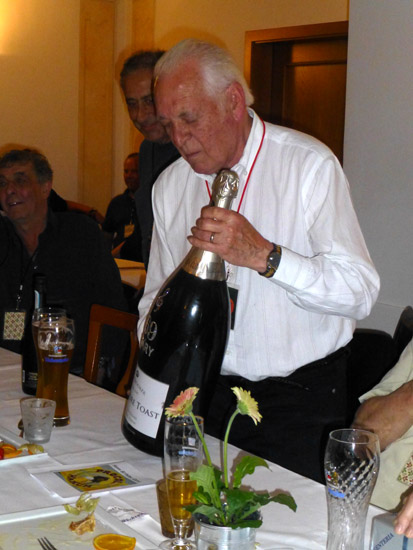 The three drawings by GB caught the eye of German engineer/designer Paul Köhrer, who was the host of the 2015 Procol party in Stuttgart

At the Stuttgart party GB approved the first incarnation, as shewn below (he's holding one of the
elements in place against the other, for the purposes of this shot. Paul is also pictured)

After this, two further prototypes came across the Channel to BtP's UK base, and a third
was finally delivered to the new Brooker residence in southern England on 18 November 2015:

Now we just need someone to come up with a suitable covering, to turn the shape into a grape:
whether this will be some woven fabric, or papier maché, or what, only time will tell ...

Gary Brooker's page at 'Beyond the Pale' | Other craft projects for fans, from members of Procol Harum