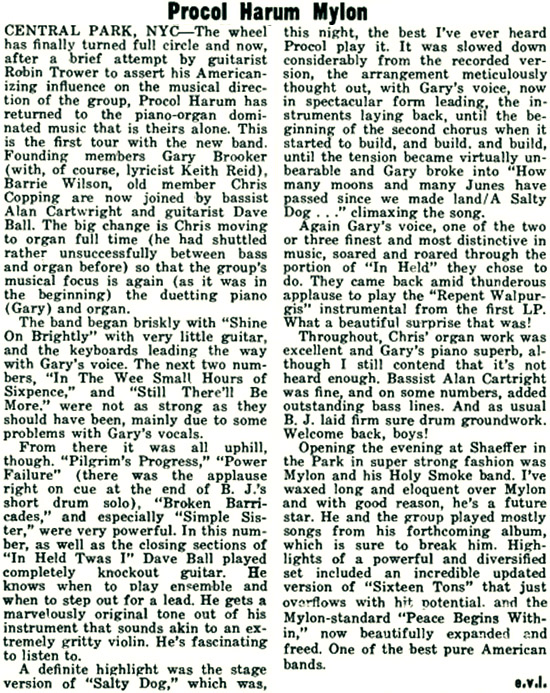 [The review also gave a favourable write-up to Mylon Lefevre, who opened for the Procols]

The wheel has finally turned full circle and now, after a brief attempt by guitarist Robin Trower to assert his Americanising influence on the musical direction of the group, Procol Harum has returned to the piano-organ dominated music that is theirs alone.

This is the first tour with the new band. Founding members Gary Brooker (with, of course, lyricist Keith Reid), Barrie Wilson, old member Chris Copping are now joined by bassist Alan Cartwright and guitarist Dave Ball. The big change is Chris moving to organ full time (he had shuttled rather unsuccessfully between bass and organ before) so that the group’s musical focus is again (as it was in the beginning) the dueting piano (Gary) and organ.

The band began briskly with Shine on Brightly with very little guitar, and the keyboards leading the way with Gary’s voice. The next two numbers, In the Wee Small Hours of Sixpence and Still There’ll be More, were not as strong as they should have been, mainly due to some problems with Gary’s vocals.

From there it was all uphill, though. Pilgrim’s Progress, Power Failure (there was the applause right on cue at the end of BJ’s short drum solo), Broken Barricades, and especially Simple Sister, were very powerful. In this number, as well as the closing sections of In Held ‘Twas in I, Dave Ball played completely knockout guitar. He knows when to play ensemble and when to step out for a lead. He gets a marvellously original tone out of his instrument that sounds akin to an extremely gritty violin. He’s fascinating to listen to.

A definite highlight was the stage version ofSalty Dog, which was, this night, the best I’ve ever heard Procol play it. It was slowed down considerably from the recorded version, the arrangement meticulously thought out, with Gary’s voice, now  in spectacular form leading, the instruments laying back, until the beginning of the second chorus when it started to build, and build. and build, until the tension became virtually unbearable and Gary broke into ‘How many moons and many Junes have passed since we made land / A Salty Dog … ‘ climaxing the song.

Again Gary’s voce, one of the two or three finest and most distinctive in music, soared and roared through the portion ofIn Held they chose to do. They came back amid thunderous applause to play the Repent Walpurgis instrumental from the first LP. What a beautiful surprise that was!

Throughout, Chris’s organ work was excellent and Gary’s piano superb, although I still contend that it’s not heard enough. Bassist Alan Cartright [sic] was fine, and on some numbers, added outstanding bass lines. And as usual BJ laid firm sure drum groundwork. Welcome back, boys!