from 'The bands, they are a-changin’'

If you can remember these ’60s acts, were you really there? Here’s a look at other flashback acts coming soon to a venue near you. 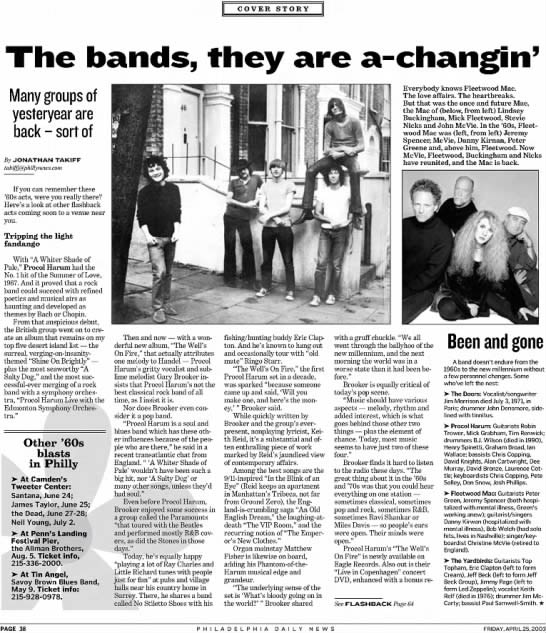 With A Whiter Shade of Pale Procol Harum had the No 1 hit of the Summer of Love, 1967. And it proved that a rock band could succeed with refined poetics and musical airs as haunting and developed as themes by Bach or Chopin.

From that auspicious début, the British group went on to create an album that remains on my top five desert island list — the surreal, verging-on-insanity-themed Shine on Brightly” — plus the most seaworthy A Salty Dog, and the most successful-ever merging of a rock band with a symphony orchestra, Procol Harum Live with the Edmonton Symphony Orchestra.

Then and now — with a wonderful new album, The Well’s on Fire, that actually attributes one melody to Handel — Procol Harum’s gritty vocalist and sublime melodist Gary Brooker insists that Procol Harum’s not the best classical rock band of all time, as I insist it is.

Nor does Brooker even consider it a pop band.

“Procol Harum is a soul and blues band which has these other influences because of the people who are there,” he said in a recent transAtlantic chat from England. “A Whiter Shade of Pale wouldn’t have been such a big hit, nor A Salty Dog or many other songs, unless they’d had soul.”

Even before Procol Harum, Brooker enjoyed some success in a group called the Paramounts “that toured with the Beatles and performed mostly R&B covers, as did the Stones in those days.”

Today, he’s equally happy “playing a lot of Ray Charles and Little Richard tunes with people just for fun” at pubs and village halls near his country home in Surrey. There, he shares a band called No Stiletto Shoes with his fishing/hunting buddy Eric Clapton. And he’s known to hang out and occasionally tour with “old mate” Ringo Starr.

“The Well’s on Fire,” the first Procol Harum set in a decade, was sparked “because someone came up and said, ‘Will you make one, and here’s the money,’” Brooker said.

While quickly written by Brooker and the group’s ever-present, non-playing lyricist, Keith Reid, it’s a substantial and often enthralling piece of work marked by Reid’s jaundiced view of contemporary affairs.

Among the best songs are the 9/11-inspired In the Blink of an Eye (Reid keeps an apartment in Manhattan’s Tribeca, not far from Ground Zero), the England-is-crumbling saga An Old English Dream, the laughing-at-death The VIP Room, and the recurring notion of The Emperor’s New Clothes.

Organ mainstay Matthew Fisher is likewise on board, adding his Phantom-of-the-Harum musical edge and grandeur.

“The underlying sense of the set is ‘What’s bloody going on in the world?’” Brooker shared with a gruff chuckle. “We all went through the ballyhoo of the new millennium, and the next morning the world was in a worse state than it had been before.”

“Music should have various aspects — melody, rhythm and added interest, which is what goes behind those other two things — plus the element of chance. Today, most music seems to have just two of these four.”

Brooker finds it hard to listen to the radio these days. “The great thing about it in the ’60s and ’70s was that you could hear everything on one station — sometimes classical, sometimes pop and rock, sometimes R&B, sometimes Ravi Shankar or Miles Davis — so people’s ears were open. Their minds were open.”

Procol Harum’s The Well’s on Fire is newly available on Eagle Records. Also out is their Live in Copenhagen concert DVD, enhanced with a bonus rehearsal from Surrey that’s really swinging.