'Beyond the Pale' : Matthew Fisher 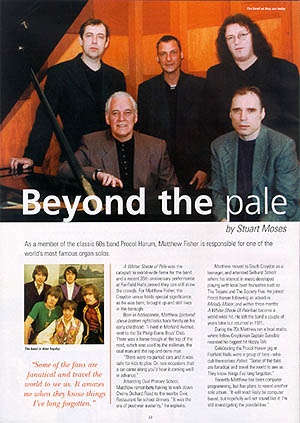 As a member of the classic 60s band Procol Harum, Matthew Fisher is responsible for one of the world's most famous organ solos.

A Whiter Shade of Pale was the catapult to world-wide fame for the band and a recent 35th anniversary performance at Fairfield Halls proved they can still draw the crowds. For Matthew Fisher, the Croydon venue holds special significance, as he was born, brought up and still lives in the borough.

Born in Addiscombe, Matthew (pictured bottom right) looks back fondly on his early childhood: "I lived in Morland Avenue, next to the Sir Philip Game Boys' Club. There was a horse-trough at the top of the road, which was used by the milkman, the coal man and the rag-and-bone man.

"There were no parked cars and it was safe for kids to play. On rare occasions that a car came along you'd hear it coming well in advance."

Attending Oval Primary School Matthew remembers having to walk down Cherry Orchard Road to the nearby Civic Restaurant for school dinners. "It was the era of post-war austerity," he explains.

Matthew moved to South Croydon as a teenager, and attended Selhurst School where his interest in music developed playing with local beat favourites such as The Trojans and The Society Five. He joined Procol Harum following an advert in Melody Maker, and within three months A Whiter Shade Of Pale had become a world-wide hit. He left the band a couple of years later but returned in 1991.

Celebrating the Procol Harum gig at the Fairfield Halls were a group of fans – who dub themselves Palers. "Some of the fans are fanatical and travel the world to see us. They know things I've long forgotten."

Recently Matthew has been computer programming, but has plans to record another solo album. "It will most likely be computer based, but hopefully will not sound like it. I'm still investigating the possibilities."